Together with Reading Museum, a collection of artists created a Reliquary for Reading [UK]. This was built over a set of pews in Reading Minster to accompany a new play, Henry II, performed in the Minster by the Reading Between the Lines theatre company in Autumn 2018. 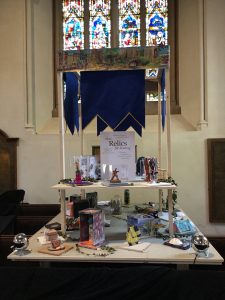 The challenge was to think of an interesting way to present the Reliquary online, using low cost and widely available equipment. We took photos of each side of the Reliquary, as best we could given the restricted space around the pews. These we then combined it with text and images from the New Relics from Reading catalogue so an online visitor could click on a relic to get the information.

Most of the relics were 3D so to make it more interesting we decided to show them rotating. We purchased a simple ‘lazy susan’ turntable (meant to help cake icing) from a kitchen shop and the cheapest tripod for an iPad we could find over the Internet. We were able to take shots of the Absolute Unit relic in situ, but the other relics were attached to the Reliquary. There was a second chance to experiment with rotating during Marina Hildebrandt’s exhibition in the HolyBrook Gallery when we had lots of time to play around taking photos of Martina’s two relics. 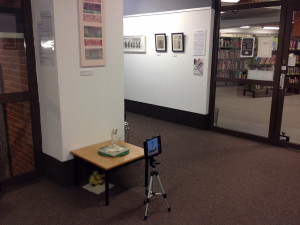 Using Adobe Photoshop (not normally classed as lowcost, but we had been able to obtain a copy under a special scheme for charities) the background could be removed from each of the photos. Using the iMuse WordPress as ‘content management system’ a post type ‘infopic’ was created which allowed a gallery of photos to be loaded. These are shown at intervals using JavaScript to create the rotation effect.

A third chance to experiment came when the Reliquary was exhibited in Reading Museum. We were able to snatch two hours while the Reliquary was being dismantled and before the artists came to pick up their relics. This was tight and we had to just pick up a relic, bung it on the lazy susan, click, rotate, click rotate, around 16 times per object. Just managed to do all 35! Phew!

Then the problems set in! As luck would have it, Adobe removed the charity offer on Photoshop so that was no longer available to us. We found two substitutes, GIMP (a near Photoshop look alike) and a free iPad app Magic Eraser. Less than ideal but it seemed doable. There were problems. Some relics had quite complex reflections on their covers, while some others merged in too much with the green wall behind.

If we were to do the exercise again a longer set-up time, and the ability to choose lighting, whether to remove a relic’s cover, and with a variety of background colours would all help get a better result. To a lesser extent, a more ‘solid’ lazy susan and tripod that cut out all wobble might also help, but wobble was only a slight problem in the event.

The results can be seen at http://relics.rgspaces.org.uk